This was a “bucket list” item for me and I dragged my family along when we had the opportunity last month. The house itself is not incredibly large, but I was in it for the history and the design choices and it did NOT disappoint!

First up, the Jungle Room! This room is not in the basement as I assumed from the “Walking in Memphis” lyrics, but instead simply along the back of the house, behind the kitchen. Green carpet on the floor, some of the walls, and the ceiling! The peach-lit stone on the left was built as a indoor waterfall feature, but wasn’t running when we saw it. The furniture here is very specific and in fact, we saw some of the receipts for the custom furniture throughout the home.

This room was the only bedroom we saw, as the upstairs is not open for tours. This is a bedroom on the main level, behind the living room, and was created for Elvis’ parents, who lived with them. It was cool to see the adjoining bathroom and closet as well.

This was the front, formal living room, just off the entry way. Lots of mirrors here, and custom glass feature shows a bit of the music room beyond, where you can spy a white grand piano!

The walls and ceilings in the stairwell to the basement were very trippy. Had to take a picture of the mirrored effect!

This is the basement screening room — he had the ceiling mirrored here too with lots of yellow and black accents. 3 tvs are built in to the wall here, a nod to the 3 major networks at the time. Look at all those toss pillows on the ginormous sectional.

This is his manager’s office, located in a small building in the backyard, just a short walk behind the attached carport. His dad was his manager and it definitely had the feeling of an office, with harsh overhead lighting and lots of brown metal furniture!

Like Loading...
Before/After :: Adding Sophisticated Color
How We Created the Perfect Tech Nook Out of a Former Hallway 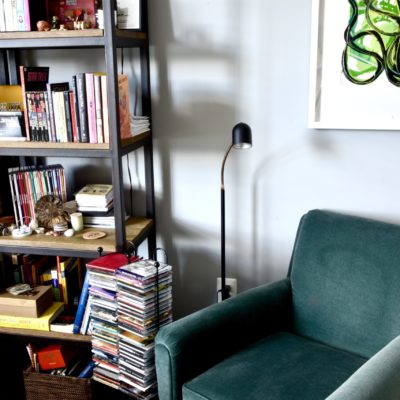 This was a fun project with an older teenager, ready to ditch all the old white furniture pieces and create a refuge and space for study, reading, … END_OF_DOCUMENT_TOKEN_TO_BE_REPLACED